Born and raised in Portland Oregon, JJ went to the University of Oregon where he was a two sport star in Football and Track and Field. A 5’10”, 157-pound wide receiver, JJ was drafted by the Cleveland Browns in the 1988 NFL Draft and played nine seasons (Cleveland Browns, Dallas Cowboys, Kansas City Chiefs, and Atlanta Falcons). He played two years with Hall of Fame Quarterback Joe Montana. He certainly was not the biggest, strongest, or fastest guy on the field, but he knew how to seize his once-in-a-lifetime opportunity and maximize his success through dedication and hard work.

JJ’s ultimate passion was to be successful at something. Raised in the inner cities of Portland, JJ and his family knew what real struggle was and he was determined to break that cycle for himself one way or another. Unlike other kids his age JJ didn’t play a team sport until his sophomore year in High School but he showed true talent and drive and quickly became an integral part of his teams. The first success was learning how to manage his time and prioritize early on in his life.

JJ wasn’t sure where he was headed when he qualified for the 1988 Olympic trials for the long jump and was the #1 high school wide receiver in Oregon. He thought it would be track and field when he didn’t receive a single D1 scholarship offer.

After receiving a scholarship to the University of Oregon for track & field, JJ earned a walk-on spot with the football team his sophomore year. He was at the bottom of the depth chart and nowhere near seeing actual playing time on the field, but his coaches and teammates didn’t know how hard he was willing to work. It didn’t take long for them to find out: JJ became a starter the next season, his junior year.

But like all long-shot stories and underdog tales, JJ’s trials were just beginning. The remainder of his college career was plagued with injuries and unimpressive stats. Still, JJ’s speed and toughness were enough to earn him an invite to the NFL Combine, a yearly gathering of the top 300 college prospects in the nation. Unsurprising to his teammates, coaches, and fans, JJ dominated the Combine. His performance earned him the 216th pick in the 8th round of the 1988 NFL Draft. That’s when the going got really tough.

“My first setback was tearing my ACL at the Cleveland Browns Rookie camp” JJ remembers. “The bright side was I was drafted and I got to sit on IR with the Browns and see what happens.   The first year, there was no pressure.  It was a learning curve.”

Eventually he got back on the field. Having always excelled in athletics he was convinced he would continue to do so in the pros but he quickly learned there is a reason why they called it the professionals.  “I remember I was grabbed by my pads and thrown to the ground” ‘Rookie- this is the NFL and every day is game day.  You better do better than that.’  I got a quick wake-up call that It doesn’t matter what I have done in the past, these guys bring their best every day.  I better figure this out.” JJ recalls. JJ learned a valuable lesson that he continues to apply to business:  Every day is game day and you can’t take days off.

As a motivational speaker JJ Shares principles from the point of view of the underdog and what it takes to  leverage where you are to be successful. The truth is, JJ felt like an underdog his whole life but he was also convinced that stats didn’t matter.  “When opportunities knock, you don’t’ answer the door, you rip the door off the hinges and make opportunities and do what it takes.” he says.

An acronym: Failures Adversities SetBacks Challenges and Obstacles = The thing that is trying to stop you from achieving your goal.  What does it look like to be outworking others?   There is a thin line that separates you from your competitor and you  have to make small incremental changes to continue to improve your game.  What is your competitive advantage?  What is the little extra thing that you bring to the table?

Understanding your “why” is the key to what you are doing.  If the why is strong enough the process to get there is not a challenge.  You will do whatever it takes.  You need to ask yourself, what inspires you, motivates you, what gets you excited?  That is what is going to take you to those good days and support you through the bad. 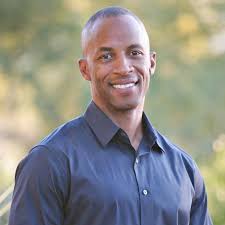 JJ Birden is an engaging communicator and a leading expert at helping individuals seize their opportunities in life.